For the past two years on December 31st I made it a habit to take some off work and go on a full day personal workshop with a very simple simple structure: Half the day goes towards digging deep into the past year; reviewing events, goals and writing down insights while the second half of the day goes into setting goals for the upcoming year.

I was never much of a "new year's resolutions" type of person. Instead, I feel more conformable understanding what values I care about and set measurable, actionable goals around them. Later, I deconstruct those yearly goals into my monthly planning cycles to hold myself accountable. It's basically a simplified personal OKRs, only without HR involved.

We're not here to talk about my 2020 goals through. What I want to highlight in this post are several insights from the passing year both as reference but also as way to re-calibrate my goal setting process next time around.

Over 2019 I was documenting my mood (ranked between 1 an 5) each month as a way to compare how diffrent events that occured throughout the month effect the next one but mostly as an exploratory way to find out how working on different project impact my happiness levels overall. 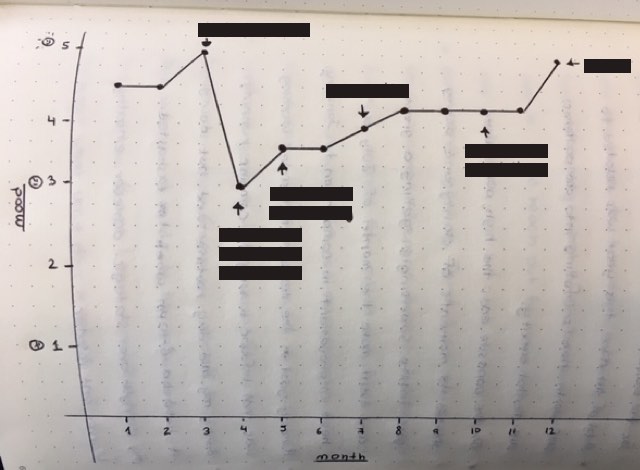 Suprinsgly, this pattern is faily similar to my daily cylcial pattern i was writing about in june after reading a book discussing the effect of time and timing on our habits and daily performance. The main takeaway here is taking extra time to plan and think through the middle portion of something I have planned since it's apperantly have an effect.

Whether it's the middle portion of a project, middle of the day or the Q2 of a year, it's worth giving this part some extra attention so I can start and finish strong, but also have the hooks in place to have a good middle point grind. A nice refernce to how important the middle portion is can be found is Brené Brown's book "Rising strong" where she talks about her discovery workshop where day 2 (the middle part) is the day that enables the major breakthroughs or as she puts it: "you can't skip day 2".

One of my 2019 goals was to "build my professional network". Having started working in a new industry a year prior, I needed to build a network of both peers in other organizations and neighboring industries. Looking at it in retrospective I was able to contact a cohort of people, made good connections that will develop throughout the year which is great, but as a goal I could not describe, at the beginning of 2019, what a "professional network" truly look like.

The result of setting this vague goal was twofold: I started working on it during Q3 of the year (which was OK considering circumstances in Q1 and Q2) but I remember that with each monthly planning my thought process was "well, this goal seems pretty vague, I'll have to deconstruct and build sub-goals around it to make it really work". After start working on it, I didn't have a clear vision on what the endgame look like for this goal: At what point am I looking at my goals list and declare this one 'done'?

Vague goals leads to vague planning leads to a somewhat unsatisfactory sense of completion. Is the thing I have now was the one I had in mind 12 months earlier when I was looking at my 2018 data and set the goal? No clue.

my writing goal needed scope, or did it?

I'm a little bit on the fence with this one: Another goal I had in 2019 was to write at least once a week which I managed to successfully meet. I actually wrote more than once a week but the thing I was missing was an answer to the question "to what extent am I writing?". When I first decided writing would be a goal, I had this blog in mind in the context of looking at tech things and writing about them, talking about different projects I was working on and reflecting on workplace dynamics.

What ended up happening is that due to the broad nature of the goal (lack of platform, lack of scope from a topic standpoint) I did meet the time criteria but most of the writing took place backstage, with breaking down my habits, understanding feelings, needs and interactions. Some of it was great self-exploratory writing which I got many benefits from but probably wasn't the original intention.

My main takeaway here is, unlike the vague goal setting argument from earlier, that there is some hidden power is scoping a goal but leave some of it open ended, especially when in comes to creative work like writing. Leaving some variables out but still keeping a loose sense of a scope (such as "once per week") allowed me to explore the limits of the subject matter ("writing") and get to interesting results and bi-products.

That being said, I don't have any open ended goals planned for 2020 - onwards we go!